The Decisive Battle of Gettysburg – July 1863

“In a way the story of Gettysburg is a story of the country roads that come to the place.  They were unpaved roads in 1863, white and dusty under the July sun, binding town to countryside, knitting the Pennsylvania townships together, unremarkable and unknown to fame; bearing now a strange traffic.  Thousands of men tramped along them to meet what was waiting at the end of the last hard mile, stepping off the map altogether, stumbling painfully onward and winning a soldiers apotheosis on hills and fields that sandwiched three days of violence in between unbroken generations of peace to make the more perfect union the nation’s elders had dreamed of…..The nation gained unity and an immortal legend because the soldiers followed these roads.”  *

The fence along the Emmitsburg Road that Rebel forces found as a deadly obstacle in their quest for Cemetery Ridge. Gettysburg, Pa. 2013

“It was a battle that had to be fought, and the forces that produced it were so stupendous that the battle became the great hinge of the war, the turning point where it began to swing in a different direction.” *

A reenactor portrays one in 53,000 casualties at the Battle of Gettysburg. 2013

“To the living of all subsequent generations, including this one, Gettysburg left an unending responsibility.  A nation built on the idea that all men – all men – are of equal worth and equal rights summons everyone of its citizens to a life-long commitment to put that idea into practical effect.” *

“Gettysburg, then, was the price we paid for our service under that great concept.  It was one step in a long progression; not an end, but a beginning – a pledge written in blood that freedom should be reborn in every generation”*

The above words, from Civil War historian, Bruce Catton, were in my head as I headed down to Gettysburg in late June 2013.  With the 150th anniversary of this famous Civil War battle in our midsts I would push the pinhole cameras to their limits attending two sesquicentennial reenactments and photographing extensively on this famous battlefield.

The Codori Farm on the Battlefield at Gettysburg. 2013

The Town of Gettysburg today is sort of a place locked-in-time.  The battle that came to this small Pennsylvania town wound up being one of the turning points in our nation’s history. The fighting in July and the dedication of the National Cemetery in November 1863, in some way or other, caused the town to remain frozen in that time; reverentially cementing Gettysburg in the time of its greatest hour.

The battle subsides on “Cemetery Ridge” at Gettysburg 2013.

A central, converging point in the 1860’s, Gettysburg today is still a good hour drive from any major modern highway.  Approaching the town, like 150 years ago, the two lane roads take you through some of Pennsylvania’s most beautiful countryside.  Fruit and vegetable farms line the route in a landscape of rolling hills dotted with neat red barns and pastures.

The same roads that brought the armies to Gettysburg in 1863, still lead to the town today.  Although now paved in asphalt, these roads lead in from this abundant, rich region of Pennsylvania and is one of the reasons Robert E. Lee and the Confederate army could sustain themselves in enemy territory in the summer of 1863. 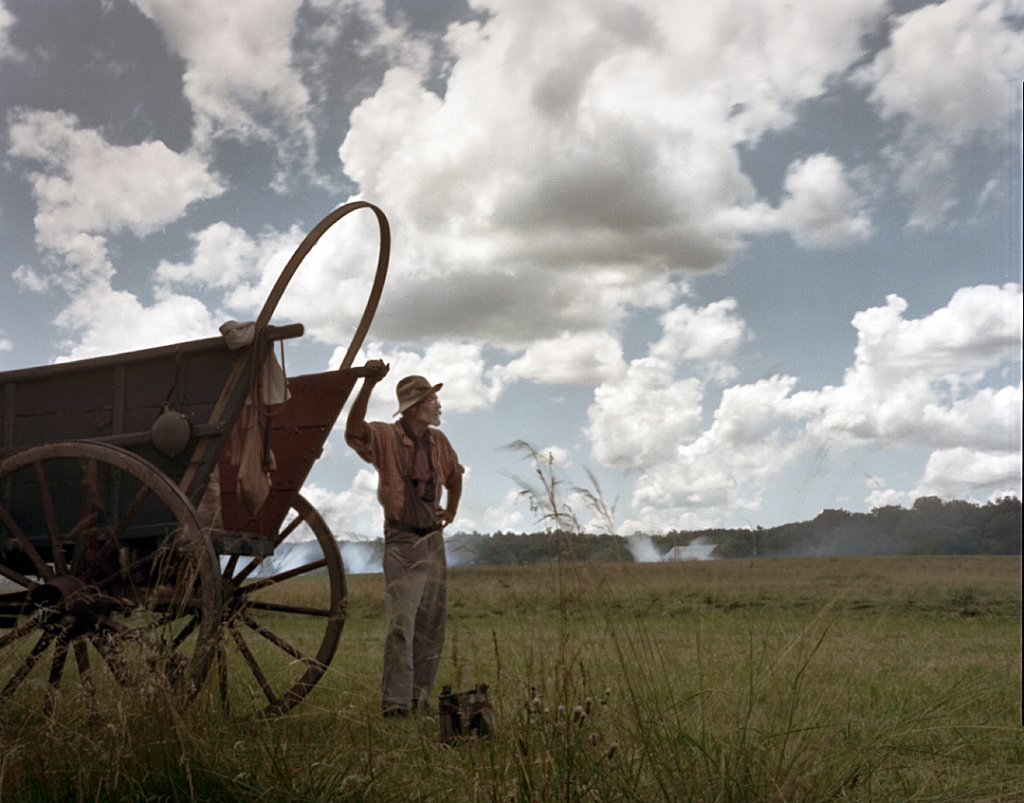 Wagoneer brings water to the battlefield during a reenactment of the Battle of Gettysburg, Pa. 2013

The battle that raged around Gettysburg, the shape of the battle, basically encompassed the town itself in 1863.  Being such a monumental battle in the Civil War the battlefield at Gettysburg was protected and preserved soon after the fighting, so the town today is surrounded, hemmed-in by the 150 year old battle landscape. 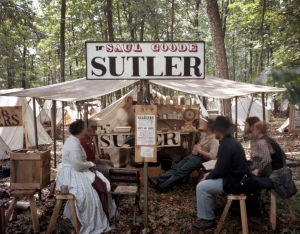 Sutler in camp during a reenactment of the Battle of Gettysburg. 2013

The streets in the Town of Gettysburg are still lined with 18th & 19th century homes and businesses.  Historic hotels in Gettysburg’s center are still operational giving tourists the opportunity to sleep where so and so slept, or lived, or died.  Seems the whole town is landmarked…but mentally block out the over-head wires, the yellow lines in the pavement, and the lantern wielding 19th century civilians leading the Gettysburg Ghost Tours can make you look twice… 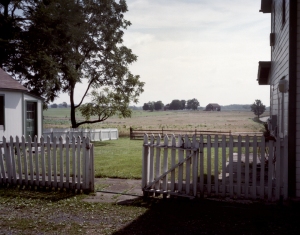 The battle raged through the small farms that dot the Battlefield at Gettysburg, PA 2013.

Pinhole camera images of the two 150th anniversary reenactments and the famous battlefield at Gettysburg, as well as, further reflections on the sesquicentennial events have been interspersed here in three separate “battle pages” added to the Civil War 150 Pinhole Project. 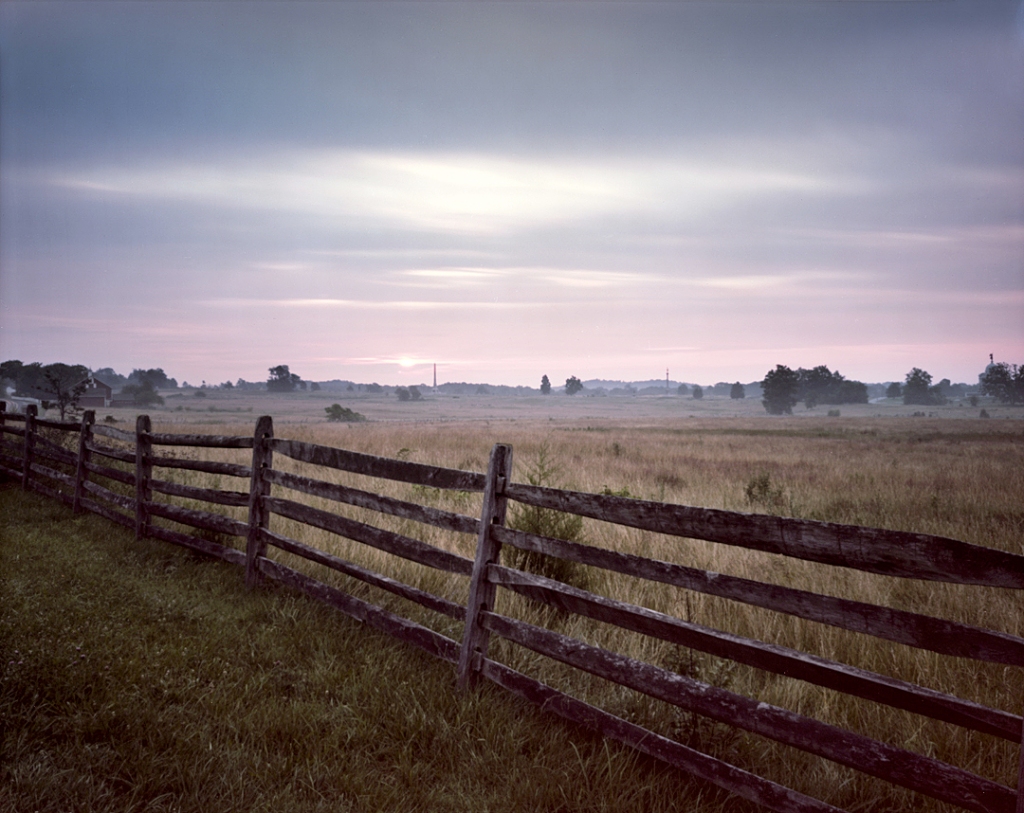 Sunrise along the Emmitsburg Road on the Battlefield of Gettysburg, Pa. 2013

See the three days of fighting in Gettysburg at the links below:

The Eisenhower Farm on Seminary Ridge, the Battlefield of Gettysburg, Pa. 2013

The Armies Collide at Gettysburg!

Citizens of Gettysburg watch as the battle begins in the distance on their edge of their small town. 2013

Citizens of Gettysburg watch as the Union and Confederate armies collide on the edge of their small Pennsylvania town. Over the next three days the very existence of the United States is at stake.   The town of Gettysburg, with a population of just 5,000 residents, will see the two armies, numbering over 150,000 men, fight it out amongst the hills, fields and in the town itself. The battle will decide the fate of the Nation.

Confederate guns open up during the first days fighting at Gettysburg. 2013.

“It had begun as an almost accidental collision between two armies, it had continued because of sheer force of circumstances made it impossible to break it off, and it was actually fought for the possession of control over the future of America.” *

The Civil War 150 Pinhole Project, witnessed this first set of these epic battles, but will be returning to Gettysburg this week for the remainder of the fighting and an extensive tour of the famous battlefield. 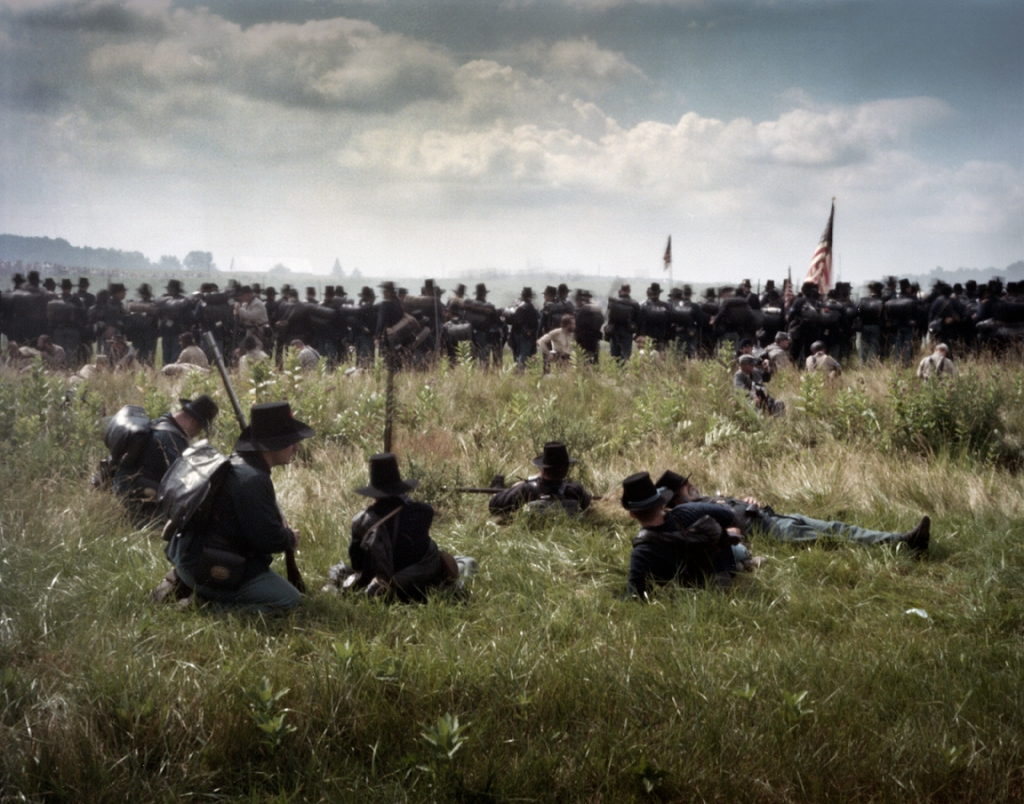 The Iron Brigade enters the fight on the first day at Gettysburg. 2013

Please check back in late July 2013 for the complete coverage of three bloodiest days in American History; three days that determined the destiny of the Nation.