“It had begun as an almost accidental collision between two armies, it had continued because sheer force of circumstances made it impossible to break off, and it was actually fought for the possession of control over the future of America” *

The armies collide on the Bushey Farm in Gettysburg, PA. 2013

“CITIZENS OF PENNSYLVANIA: PREPARE TO DEFEND YOUR HOMES!” the newspapers shouted in late June 1863 as the Confederate army began it’s invasion of the North.  As these headlines appeared across the country the State of the Union was in serious crisis.  “Unquestionably“, newspaper editor Horace Greeley wrote, “the first six months of 1863 were the darkest hours of the National Cause” Things looked so dire at this time that New York lawyer, George Templeton Strong, wrote, ” All is up….the Historical Society should secure an American flag at once for its museum of antiquities”

There was good reason for such pessimism in the North and great optimism in the South as the Rebels entered the Keystone State.  After their astounding victory in May at Chancellorsville, the Confederate army, “when they went north they carried the undeveloped climax of the war with them.  Win or lose, this march was going to take them to the high water mark” *

“And yet, the Union army survived its battering at Chancellorsville in far better shape than it had at Fredericksburg.  A sort of fatality had…settled down upon the army of the Potomac, the sense expressed by a corporal in the 71st Pennsylvania, that the Soldiers, must depend Only on themselves for fighting out an honorable peace.” ***

Union troops enter the fray during a reenactment of the Battle of Gettysburg. 2013

And this time things would be different; the Union army would be fighting on their own soil, defending their own homes and hearths. 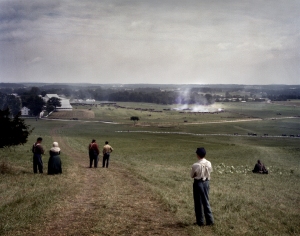 The battle begins on the Bushey Farm, at Gettysburg. 2013

As the huge Confederate force made its way through Pennsylvania, newly appointed Union General Gordan Meade reacted quickly.  “Meade had to defend Washington, along with Philadelphia, Baltimore, and the rest of the northland, and the only way to do this was to bring Lee to battle and defeat him.”  General Meade based near Frederick, Maryland, sends, “Maj. Gen John Buford’s division of Calvary north to cut across what appeared to be Lee’s line of march. To molest the troops that Buford was likely to find, Meade chose Maj. Gen. John Reynolds and gave him command of one third of the army.” *

Gettysburg girls wave to the passing troops on the Bushey Farm, Gettysburg. 2013

The Confederate army, in last days of June 1863, upon Lee’s orders, were spread out in three giant columns moving north through Pennsylvania. When General Lee learns that the Federals are in Maryland and marching into Pennsylvania, he recalls his army and orders it to concentrate at the nearest the town.  The town of Gettysburg…..

On June 29th 1863, Union Major General John Buford and his 2500 calvary troops rode from the east into Gettysburg and stopped at the high ground, the town’s cemetery, a hill that commanded a view of the entire surrounding area.

The Lutheran Seminary at Gettysburg. 2013

“The land west of Gettysburg is a series of ridges, like waves in the earth.  On the far side of town there was a red brick building, the stately seminary, topped with a white cupola. The first rebel infantry came in that way, down the narrow grey road from the mountain gap… It was from this stately cupola that Buford saw the approaching Confederate army.” **

Buford knew his 2500 troopers were no match for what he saw approaching the town.  Watching the Rebel infantry approach and sensing the weight of Lee’s army behind it, Buford sends a note to General Reynolds to hurry up his forces.

“Have occupied Gettysburg. Contacted large party of Reb infantry.  I think they are coming this way.  Expect they will be here in force in the morning”  There were 10,000 enemy headed his way and, “there’ll be the devil to pay”  **

Buford hoped he could at least delay the Rebels long enough for Reynolds and Union infantry to arrive. If they could delay the Confederates and eventually occupy that good high ground at the cemetery, the Federals could finally fight it out with the Rebels on ground of their own choosing.

Buford’s dismounted cavalry attempts to hold the line on day 1 at Gettysburg. 2013

Buford receives a reply message from Reynolds, “General Buford: Hold your ground. I will come in the morning as early as possible.” 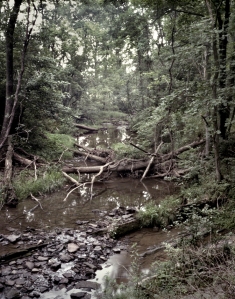 General Buford was an army veteran from out West.  His calvary troopers were trained and cut their teeth in the Mexican War and conflicts with Native American tribes effectively fighting dismounted and taking advantage of their multiple shot carbine rifles.  These Union troopers set up along Seminary Ridge, facing the Chambersburg Pike and prepared to meet the approaching Confederates.

These first elements of the Confederate army arriving at Gettysburg were part of Gen. Harry Heth’s division.  Spying some blue uniforms on the approaching ridge and believing they were a small group of local militia, Heth moved his troops into the town but soon came up against fierce resistance from Buford’s men.  The Confederates charged across Willoughby Run on their way up McPherson’s Ridge exchanging this ground and fighting across the creek throughout the morning battle.  Buford’s troops fought tenaciously but the small calvary force was becoming overwhelmed by the increasing Confederate attacks; until the timely arrival of John Reynolds and the Iron Brigade.

The Railroad Cut on the Battlefield at Gettysburg, Pa. 2013

“For the most part, the story of the July 1 fighting at Gettysburg is a story of unrelieved defeat for the Federal troops, but during the morning hours there were moments of triumph. One of these came when Southern troops tried to advance down an unfinished railroad cutting north of the Chambersburg Rd., and were compelled to surrender”  *

The Iron Brigade arrives on the Bushey Farm on day 1 at Gettysburg. 2013

General John Reynolds, leading the Iron Brigade into action, was shot and killed by a sniper in the early moments of the contest.  Fighting along Seminary Ridge, McPherson’s Ridge, and an unfinished railroad cut adjacent to Oak Ridge became fierce as more and more Confederates began arriving on the field from different directions.  The Federals, overwhelmed, finally began a retreat through the town of Gettysburg.  Valiant rearguard fighting bought as much time as possible as the Federals set up a defense along those ridges Buford had spied when he entered Gettysburg; Cemetery Hill, ironically, would be the Union army’s last defense.

Meade hearing of Reyonlds’ death dispatches Maj. Gen. Winfield Hancock to Gettysburg to assume command and to determine if “Gettysburg was a suitable place for an all-out fight with Lee”.  Hancock arrives as Union troops are swarming in retreat through the town and begins to organize a defense on Cemetery and Culp’s Hills.  Hancock had determined that this was suitable ground for a fight; this high ground at Gettysburg would serve the Union army well in the coming days.

Oak Ridge looking toward the Confederate approach to Gettysburg. 2013

Fighting sputtered out as evening fell on July 1st 1863.  General Lee arriving on the field earlier in the day perceived the strategic importance of those commanding hills and sent an order to General Richard Ewell to take those hills “if practicable “.   Ewell’s troops, after marching and fighting through Gettysburg all day, were in no shape to renew the fight.  General Ewell decided that attack would have to wait for the following day. 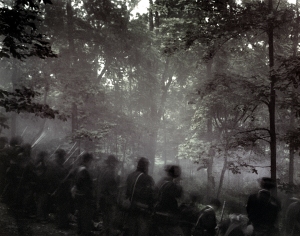 Union troops man “Culp’s Hill” during a reenactment of the 150th anniversary of the Battle of Gettysburg, Pa. 2013

This decision by Gen. Ewell, not to take the high ground on July 1st, has been a center of controversy for 150 years.  It is believed that if the Confederates had taken Cemetery Ridge on July 1st, the three day Battle at Gettysburg would never have happened.  The Union army, out flanked, would have had to retreat and find somewhere else to make their stand.

Confederate troops form-up at the base of “Culps Hill” during a battle reenactment at Gettysburg.

As night descended on Gettysburg after that first days fight, Union soldiers began digging in on Culp’s Hill and adjoining Cemetery Hill and prepared for what they knew would be a big fight in the morning.

That evening when Robert E Lee was asked what his next move would be, sticking to his offensive battle plan, he famously retorted, “If the enemy is there tomorrow, we must attack him.” 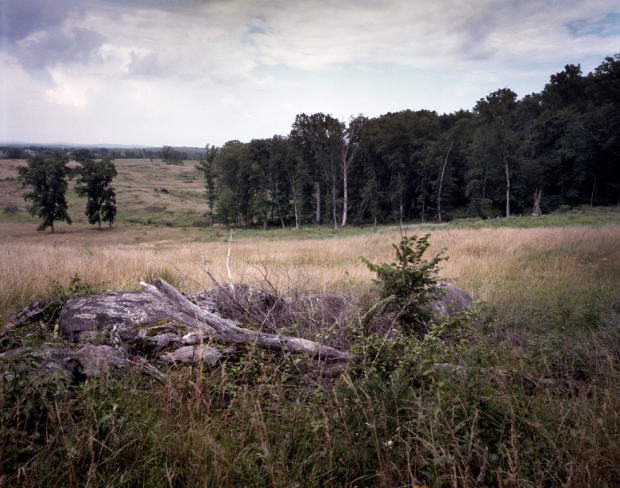