On June 15th 1863, confederate forces, commanded by Robert E. Lee,  crossed the Potomac River at Williamsport and headed into Pennsylvania. The Last Invasion had begun. 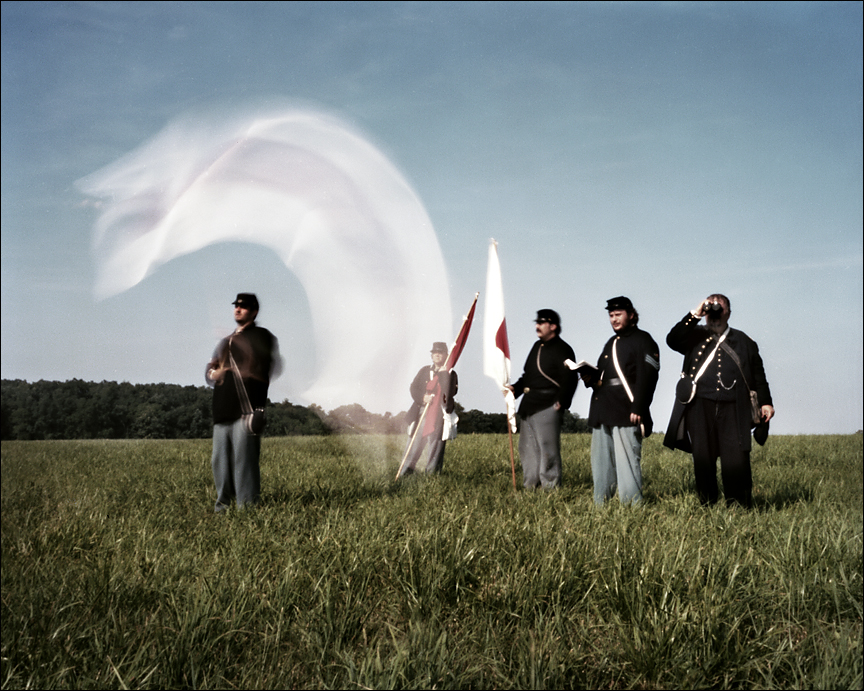 Signal flag in motion as re-enactors send messages during a battle reenactment near Gettysburg, Pa. 2012

On the heals of their astounding victory at Chancellorsville in May, moral was high as the 70,000 strong rebel army moved through the keystone state and marveled at the beautiful countryside.  Pennsylvania’s small family farms were noticeably different then the large plantations of the confederacy.  After nearly two years of fighting in the south, the neat snake-rail fences dividing the country, the abundance of large dutch barns and fields ripe, an unmolested landscape, served as a stark contrast to war ravaged Virginia.  With abundant forage for the troops to acquire along their journey, spirits were high in the confederate army as the South brought the war North. 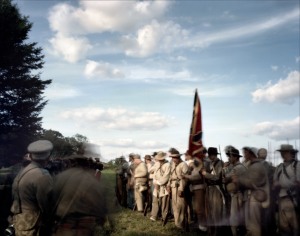 Confederate re-enactors form up during a battle reenactment in Elizabethtown, PA. 2012

General Lee, ” marches knowing that a letter has been prepared by Jefferson Davis, a letter which offers peace.  It is to be placed on the desk of Abraham Lincoln the day after Lee has destroyed the Army of the Potomac somewhere north of Washington.” * 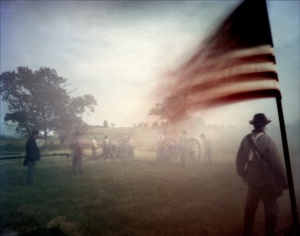 In June of 1863 the country was at a crossroads.  A string of confederate victories and the continuing cost in blood had many in the north looking to end the war with a negotiated peace.  As word of the Confederate invasion reached Washington, President Lincoln appointed a new general, George Meade, to take the reins of the Union Army. General Meade would have just a couple of days to assume command before meeting the confederates at the crossroads town of Gettysburg, PA.

What takes place at Gettysburg in the coming days would turn out to be the apex of the Civil War and the three bloodiest days in American history.  July 1-3, 1863.

The Civil War 150 Pinhole Project will be in Gettysburg for the 150th anniversary of this most seminal battle of the war.  Two major reenactments are being held in the vicinity of this small Pennsylvania town in June/July 2013.  Over 20,000 reenactors have registered for these sesquicentennial events and tens of thousands of spectators are expected.  Please check back to the blog as postings of the battlefield and reenactments will be added to the project in late July.

* Quote from, “The Killer Angels” by Michael Shaara

Abe and the Apex of the War

“Historians frequently speak of “turning points” in war — events or time periods that produce crucial changes in the progress, nature or ultimate outcome of a conflict. During the Civil War, no period better fit that description than the year 1863. Indeed, that year might justifiably be considered the single most critical 12-month period in all of American history. As we now mark the sesquicentennial of that momentous time, it is — to borrow Lincoln’s elegant phrase — “altogether fitting” to recall some of the key events of 1863 and reflect on their enduring legacy.”  Mark Scherer 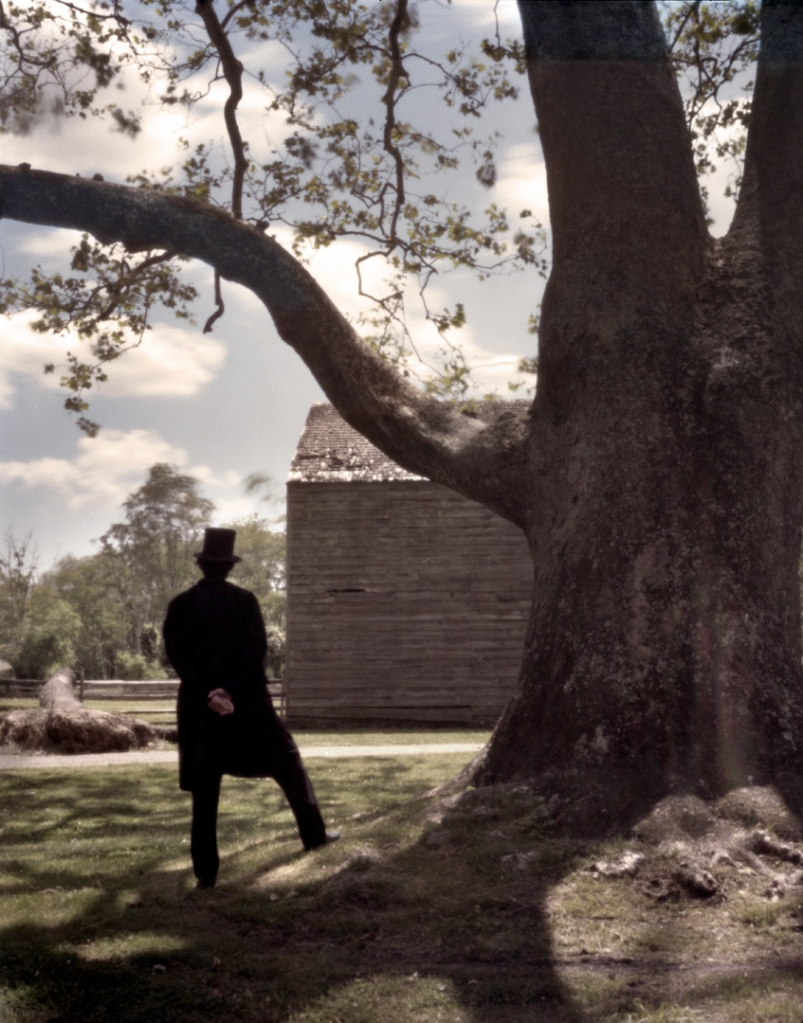 Lincoln at the “School of the Soldier” in Wall, New Jersey. 2013

The Civil War had been raging for almost two years when Robert E. Lee and his confederates nearly destroyed the Union Army at Chancellorsville in May 1863.  The Confederate victory at Chancellorsville was just one in a continual string of victories for the South.  In fact, up until this point, the Rebel armies had bested the Union in almost every engagement of the war.  Dismayed by these set backs, President Lincoln had gone through a slew of commanders.  Irvin McDowell, George McClellen, Alexander Pope, McClellen (again), Ambrose Burnside, Joe Hooker and in the aftermath of Chancellorsville, George Meade.

Not only on the battlefield but in Washington Lincoln had his troubles.  The president was being attacked by not only his rivals in the democratic party but also members of his own party for the issuance of the Emancipation Proclamation in January of 1863.

The Emancipation Proclamation, freeing the slaves living within the confederacy, also authorized the enlistment of African-Americans and helped swell the ranks of the Union Army. Despite this the Proclamation was far from popular in the North and gave the impression that the aim of the war had changed from one of “restoring the Union” to one of “ending the institution of slavery”.  Resistance to the Proclamation and general anti-black feeling amongst some white northerners culminated in the Draft Riots in New York City in July 1863 and added fuel to the “copperhead movement”, a growing group of northern citizens that lobbied for a negotiated peace with the Confederate States.

In all of Lincoln’s troubles in the spring of 1863, Confederate General Robert E. Lee saw an opportunity.  On the heals of his astounding victory at Chancellorsville General Lee felt the time was right to bring the war to the northern states. An invasion of the North would seriously threaten cities like Philadelphia and Washington.  The bounty of Pennsylvania, unlike the countryside of war-ravaged Virginia, would provide all the food his army would need as it made it’s was north.  General Lee and the Confederate government reasoned that fighting a decisive battle and defeating the Union Army on their own soil would end the war and be the final act in securing an independent Confederacy.

In early June 1863 the Confederate Army began the move north, screening their movements to avoid detection, and quietly slipped into Maryland.  This army of more then 70,000 troops quickly moved on into Pennsylvania, the grand movement basically undetected as can be assessed by Lincoln’s telegrams in late June 1863.

On June, 24th, Lincoln sent a telegram to Union Major General Darius Couch in Harrisburg, Pa.  “Have you any reports of the enemy moving into Pennsylvania? And if any, what?” and on June 30th, just one day before the armies would meet at Gettysburg, Lincoln wrote, “I judge by absence of news that the enemy is not crossing or pressing up to the Susquehanna. Please tell me what you know of his movements”.

By June 30th the Rebel army had in fact reached the Susquehanna at Harrisburg, Pa. 120 miles north of Washington.  Upon hearing this news General Meade quickly moved the Union Army to shield the Capitol.  Moving north and west the Union Army would eventually collide with the Confederates at the small town of Gettysburg, Pennsylvania.

What transpired there, after three days of intense fighting, on July 1-3rd, 1863, would turn out to be the largest battle ever fought on American soil and the very apex of the war……