The End of the Civil War

In May of 1865 the Federal Government conducted a Grand Review of the Armies in Washington. With the Civil War nearly over the military parade was intended to honor the veterans of the war but also lift the spirits of the country in the wake of the death of President Abraham Lincoln. The one hundred and fifty thousand Union troops that paraded through the nation’s capital were actually just a fraction of the Union armies. In 1865, by the war’s end, more than a million Americans had fought for the Union alone making the Grand Army of the Republic the largest veteran army in the world. 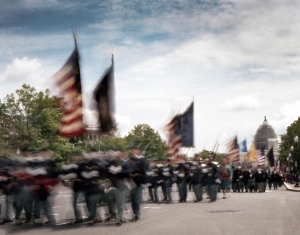 The month of April 1865 is arguably the most important month in the history of the United States of America. That month the nation would endure the assassination of the President and face the terrible prospect of the conflict devolving into a guerrilla war. The nation was on a dangerous precipice and miraculously it would be the soldiers themselves that would decide how the war would end.

In May of 2015 reenactors from around the country gathered in Washington DC again to commemorate the Grand Review and the 150th anniversary of the end of the Civil War. Click the link below to see images and read the story about how the Civil War ended and where we are today at the conclusion of the Sesquicentennial.

The End of the Civil War